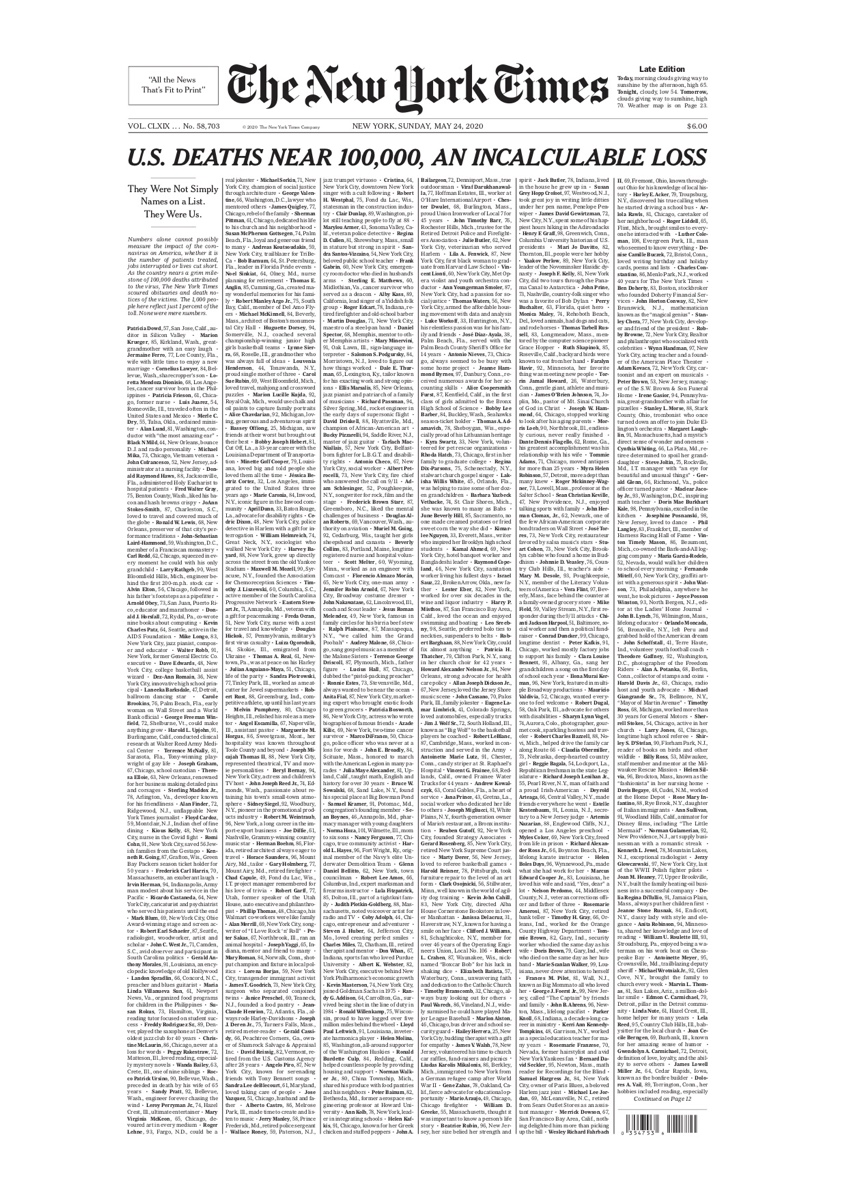 In late May, the United States was still severely threatened by the coronavirus COVID-19. To mourn the Americans who passed away in the pendemic, The New York Times published a list of thousands people with names and details on the cover and inside pages of May 24, just a day before the Memorial Day.

The cover headline of this mainstream newspaper "U.S. Deaths Near 100,000, An Incalculable Loss", plus the subtitle "They Were Not Simply Names on a List. They Were Us"; the meaning is profound and shocking! Anyone with a conscience who sees the names of the deceased printed on black and white on the newspaper, he must have "a special feeling in the heart".

However, the US Presidential convey set off from the White House early that morning to a golf course of manydozens of kilo-meters away. Donald Trump, wearing a white jersey and without a mask, was comfortably swinging and playing golf under the escort of a large number of secret agents ... 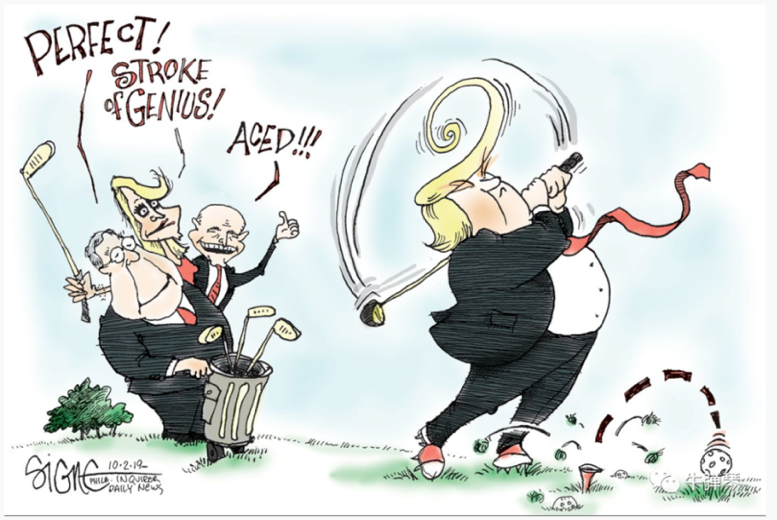 According to CNN, that was the first time Trump has returned to the golf course since the outbreak of COVID-19 in US sinceMarch. The report counts that Trump has been in power for less than 4 years and played a total of 265 times. Now he has reappeared in his favourite golf course.

During the moment of mourning the pandemic, US Democratic Presidential Candidate Joe Biden seized the opportunity and posted a video of Trump's eagerness of playing Golf through Twitter and he wrote: " The death toll is still rising. The President 华夏智能网is playing golf.” Of course, as theRepublican Presidential Candidate, Trump immediately sneered: "Biden was constantly vacationing, relaxing & making shady deals with other countries, & that (Obama) Barack was always playing golf, doing much of his traveling in a fume spewing 747 to play golf in Hawaii."

In fact, U.S. Presidential Election will be held in November this year, how could such a pandemic that threatening the lives of every American seriously would not beaffecting the increasingly competitive elections? A recent poll shown Biden leads Trump by about 5%, but there are still 20 to 30% voters who are unclear. They are the two parties fighting at any cost. 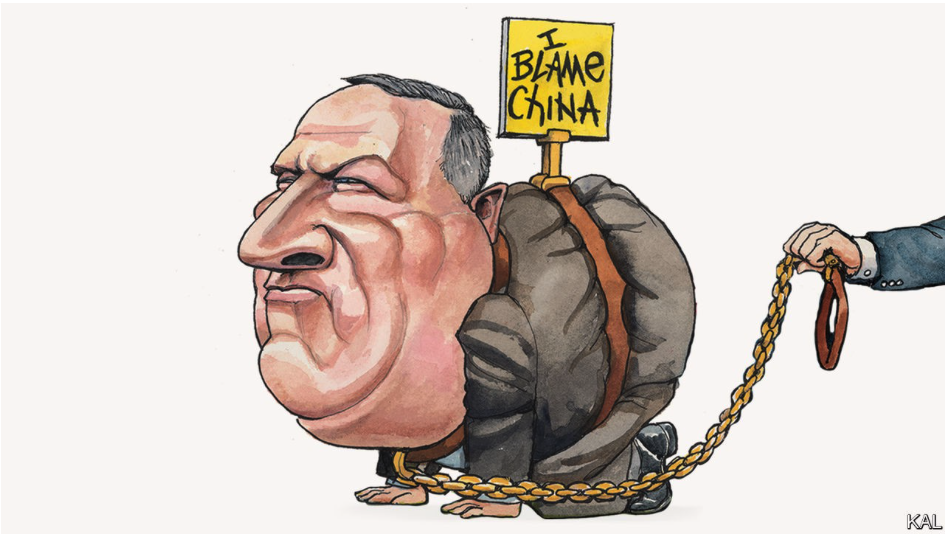 Anti-COVID is like war, election is a battlefield. When Trump is caught in a "life-and-death battle", he is not very sure about his victory. Secretary of State Mike Pompeo, who is currently performing foreign affairs on behalf of the President, has recently been busy in putting his muzzle out, and trying to divert the attention of the American to serve his master.

This former director of the Central Intelligence Agency is using Taiwan's Tsai Ing-wen to provoke trouble on both sides of the strait. He first beautified how the Taipei Act hasstrengthened US-Taiwan relations and claimed how to promote closer US-Taiwan economic cooperation. Later he said US and Taiwan sharing a common vision in the Asia-Pacific region, andsuggested COVID-19 is an opportunity to let the international community understand how Taiwan's epidemic prevention model is worth emulating.

US praised Tsai Ing-wen for her continuous improvement of the US-Taiwan relations. With that, Pompeo publicly congratulated Tsai Ing-wen for her second term on behalf of the Trump administration, blatantly ignoring the "One-China Policy" and the provisions of the three Sino-US JointCommuniques. This unprecedented move is obvious that Pompeo has learned the contents of Tsai Ing-wen's speech beforehand.

In her speech on May 20, Tsai Ing-wen did not mention The 92 Consensus, which was questionable. In her longtext, she mentioned that both sides of the strait have a responsibility to avoid widening opposition and differences, claiming that she will maintain an open attitude to solving problems.

However, Singapore media Lianhe Zaobao quoted Ma Ying-jeou’s office as saying Tsai Ing-wen not even mention The92 Consensus, and she constantly manipulating the feelings ofanti-China. As a result, both sides of the strait have lost the basis of dialogue". 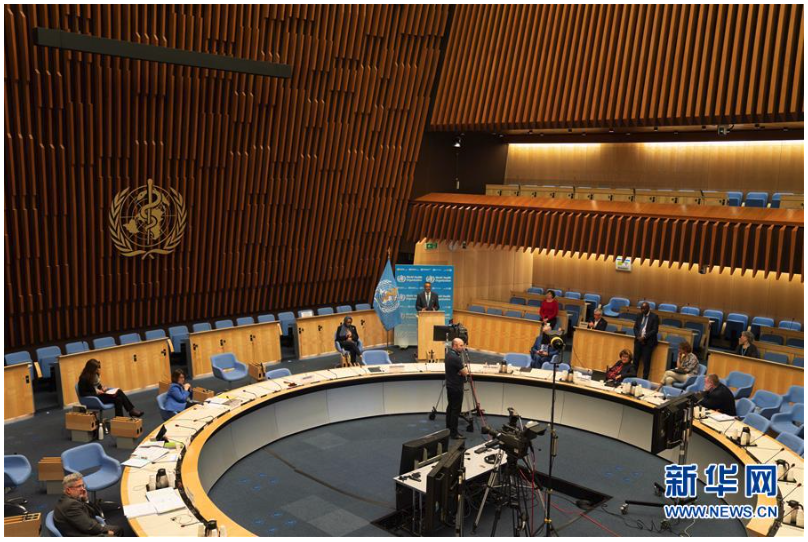 The Taiwan authorities emphasized "pro-US anti-China" is worrying, not to mention that US support on Taiwan is always unreliable. Some scholars pointed out that it is never a good thing for Taiwan to put its future in US. For the past 4 years,US-Taiwan relations have been "super asymmetric", and Taiwan often become the loser.

For example, at the World Health Organization Conference (WHA) in late May, Pompeo boasted he could win the support of all countries in the world for Taiwan, and let Taipei participate as an observer in the conference and other related activities of the United Nations. But at last, Taiwan did not receive invitation to attend the meeting, and later the Taiwan authorities found out that US did not explicitly support in advance, only a few "friends" of Taiwan submitted proposals.Therefore, those who conspired "making use COVID to seek independence" could not succeed yet paying for the price . Later as expected, Pompeo turned the spear to Beijing. 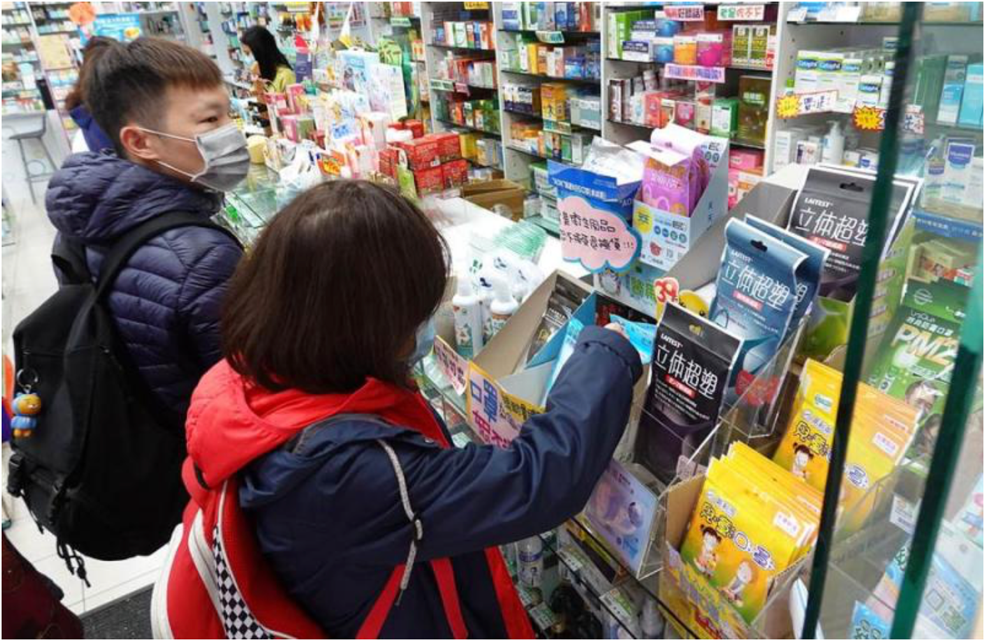 Another example was the outbreak of COVID-19 in US during mid-March. Taiwan and US signed the "Joint Statement on a Partnership against Coronavirus ", and under the cooperation framework, Taiwan will continue to provide US with 100,000 urgently needed face masks per week, while US agreed to ship300,000 units of protective clothing materials to Taiwan. After the news came out, it caused a fierce rebound among the people in Taiwan, because the supply of masks in Taiwan was very tight at that time, restricting people to buy, even a mask is hard to find everywhere. Taiwan also once banned the export of masks, forcing the Singapore factory in Taiwan to relocate back to the Lion City.

In fact, the Trump administration pursues the "America First" policy. The US is severely attack by COVID-19,the number of confirmed cases is always the world's top, and nowmore than 1.7 million! In these days, US has been rushing to buy medical supplies all over the world, even the state governments governed by different political parties have been seized by the federal government for the purchase of supplies.

Obviously, the Taiwan authorities once exaggerated the US-Taiwan epidemic prevention cooperation, which simply cannot be equal. At the time when US is in trouble, Taiwan couldonly send masks to the States unilaterally. As for the raw materials for protective clothing in US which was in dispute, only in mid-April did the first batch of goods arrived Taiwan. According to media reports, Taiwan spend money to purchaseindeed, rather than "masks replacing protective materials" as earlier mentioned. 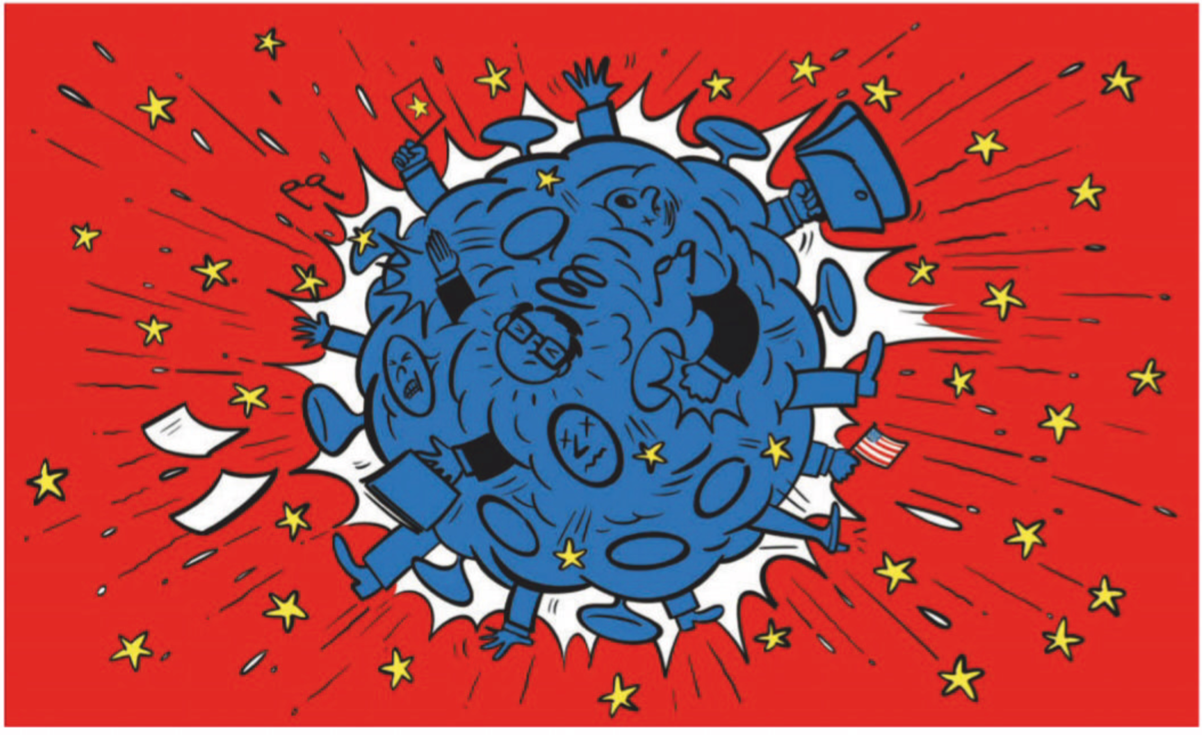 At this moment, the US Presidential Election Campaigning is in the heat of the battle, American politicians often give priority to their own interests. Therefore, I advise those in Taiwan who want to be Trump ’s pawns: don’t overdo it, or be too self-inflated. Otherwise a crisis occurs, it is the people of Taiwan to face “incalculable losses”, and forcing them to pay the bill with huge price.